This year (2013) ,in June and then again in October and November  , I've tried tandem jig rigs a few times . With and without added spinners, they've  worked on Crappies ,Gills, Yellow and White Perch . With dropping temps in Fall,fish food is perhaps more scarce and yet the feeding activity level of the predators is still in high gear .This makes for a competitive feed and prime time for tandem rigs. Indeed, the only time I ever caught two fish at the same time on one lure was in October . Early one cold  morning, while the steam was rising off the water,two 12" Bass grabbed a 1/4 oz.  Bill Norman, Green Tennessee Shad  colored crankbait . After twitching the lure on top of the submerged weeds one of the bass grabbed it and swam away and then a most peculiar tugging war happened on the end of my line .It wasn't until I got the catch into the boat ,that I realized another bass  had got attached to the second available treble .Wish I knew enough to throw some tandem single hook rigs back then . Here's the rig and description of how I tie it . 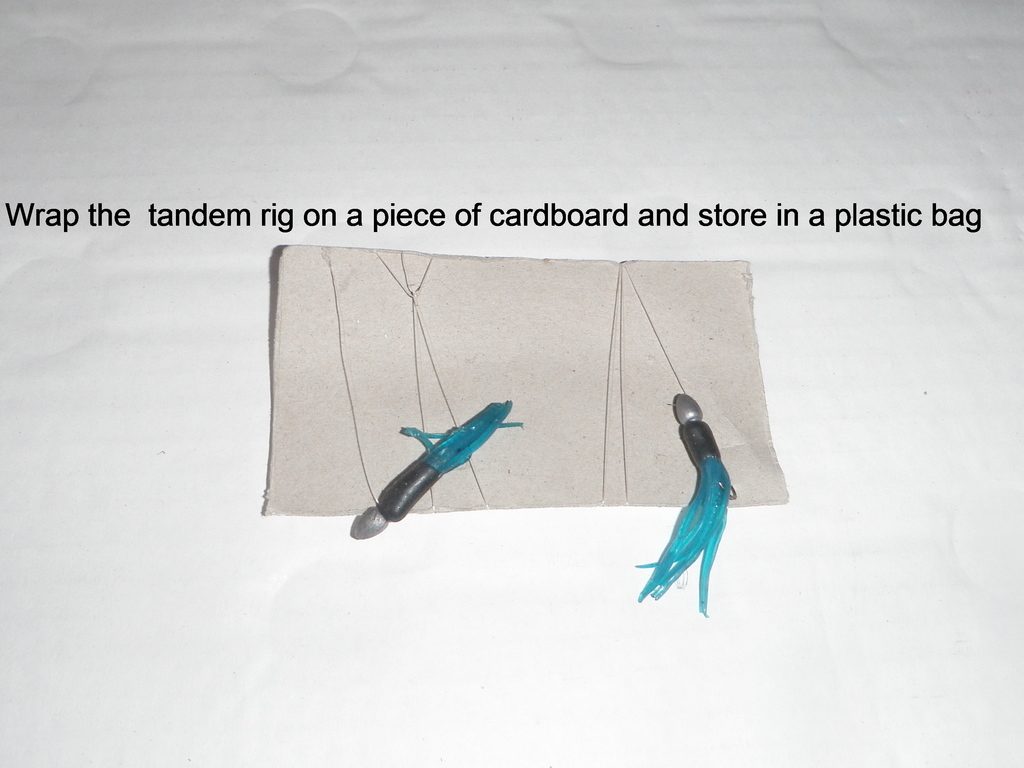 1) Starting with  a 25" piece of 8#, 6# or 4#  line ,tie a barrel swivel to top end .This will later be attached to a snap swivel  coming from mainline after rig is complete and ready to use .  I like to hang the barrel swivel ,using a push pin, on a wall to keep the rig straight while making the ties. 2) Using a blood knot 6" down from the barrel swivel  ,attach a 2nd line ,to the 25" line. That will be used to attach the higher jig .Clip off excess on higher jig.3) Tie in two jigs of choice to the upper and lower lines. The jigs should be about 6-8"  apart. After tying four knots your rig is now complete.
4)Next , wind the tandem rigs around cardboard ,mark the line test on the card, and put each one  in a see through plastic bag and use them as needed .The rigs  can attach ,from the barrel swivel ,to a snap swivel from the main line so if you want to change to a plug, spinner or spoon there's no extra tying needed .I've tried green/chartreuse, Black/Blue and Red tube jigs as well as Buck tail or feather jigs with and without Twister tails ,and /or bait.  I've used the same idea while ice fishing  in the past but this is a swimming  horizontal tandem approach .
Jig sizes for Panfish ,that I've had success with ,range from 24th oz. up to 16th ounce .By all means add shot or use heavier or lighter  jigs as needed .I swim these slow and steady and wrist pop them, raising  and lowering my rod tip ,trying to work as much of the column as I can to find consistent catches. The steady swimming retrieve to a break line is getting Perch and Crappie to hit .I'm assuming the wrist pops attract them visually. I've dragged bigger, single Tube Jigs on bottom and caught Bass ,Yellow Perch and Crappie in the past so I've got to remember to try that retrieve as well ,using the smaller pannie tandem setup .Try tandem Feather and Buck tail jigs baited and un tipped to see if the fish like them as much as these plastic tube baits. Also, I tie some  same size jigs on the upper and lower sections as well as a combo rig featuring a heavier/bigger jig on the bottom and lighter/smaller on top .

Here's a report of a successful day using the Tandem rig: 11/4/13 :With wind chill the air temp ranged from low 30's to low 40's. Fished SE end of lake by dam facing the NE wind ,from 10am till 2:30pm .65 fish total ,4 species.
SPOT ONE: Best Fish per species ,were 12 " and unbelievably wide Crappie(my favorite fish of the day),10.5" White Perch ,11" Yellow Perch and about an 8" Male Bluegill . Started off with Tandem white Buck tail jig
rig. Immediately caught a Crappie around 11"and a few Yellow Perch .Fingers were cold so I put on mittens over fingerless gloves and searched the shore line for Mussels . Found a huge one .First time fishing with mussels ,worked great ! I tipped the Tandem rig jigs with Mussel bits .My first of three tandems was a Yellow Perch on the bottom jig and a White Perch on top . Got two other tandem Yellows later. Experimented, tipping both jigs, and just tipping bottom jig and got several fish on upper jig /untipped , as well as lower jig tipped . Caught 4 species ,Crappie ,Yellow Perch, White Perch and Bluegills .Switched over from white Btails to Chartreuse Btail with 1" Chartreuse twister tails .Kept catching . Switched to and caught a few on the float rig . One Yellow Perch kept for cut bait after no more mussels were found. Perch eye worked great on the float /Jig rig. In the meantime a few casts with a Rattlin' Rap scored zip.
SPOT TWO: Mostly slip floating and the Crappie loved the Squirrel tail/chartreuse twister tail/Perch eye offering . Rip rap with a band of windblown leaves right up against the end of the lake was the ambush point for Crappie and Yellow Perch. Caught about 5 nice heavy and thick Crappie 11" - 13" and then it was all Yellow Perch besides perhaps another Crappie or two . Tried perch roe on tandem rig jigs and caught. the 3rd double  at spot two. A few fish caught on 10th oz. Thunderbolt spoon tipped with perch stomach or flesh. All fish released but I may regret that !

Early to mid fall is a great  time for tandem swim jig rigs, and if the fish are bunching up and the bites hot this may be a quicker way to fill the stringer than the very effective slip float approach .One way to work a tandem rig is the slow steady swim with perhaps a few twitches of the rod tip now and again. A second alternative ,at times preferred by the fish ,is more of a lift drop drag bottom retrieve ,the way you might work a single jig or spoon.
http://bigbluegill.com/photo/1st-fish-on-tandem-rig?context=album&a... 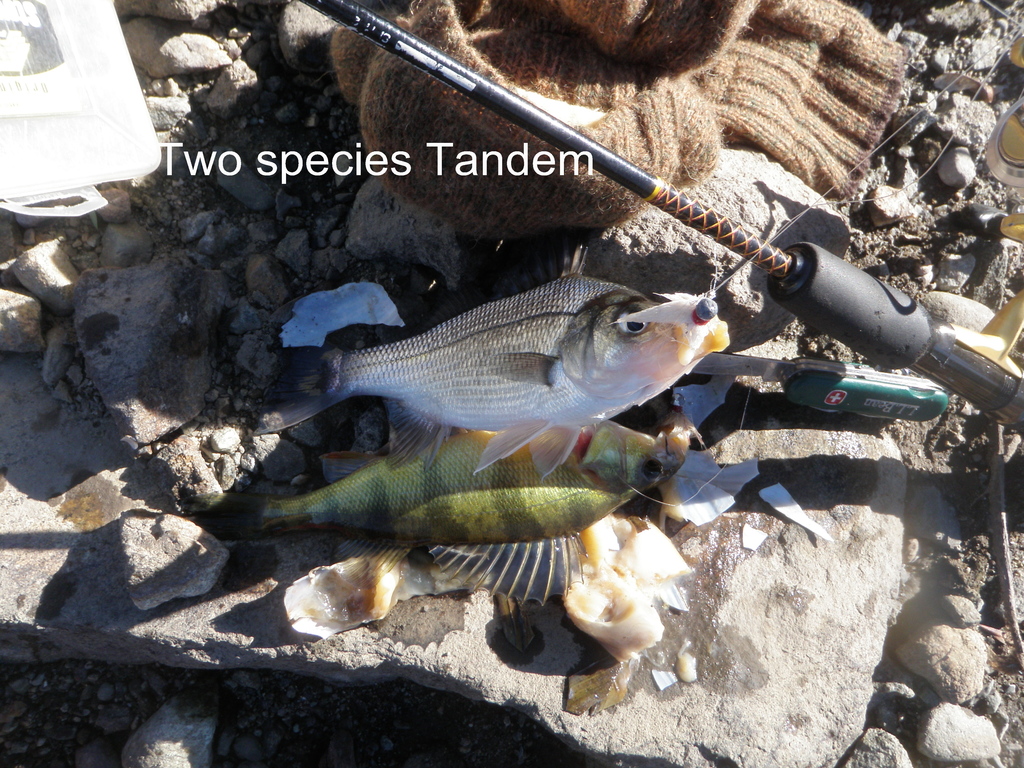 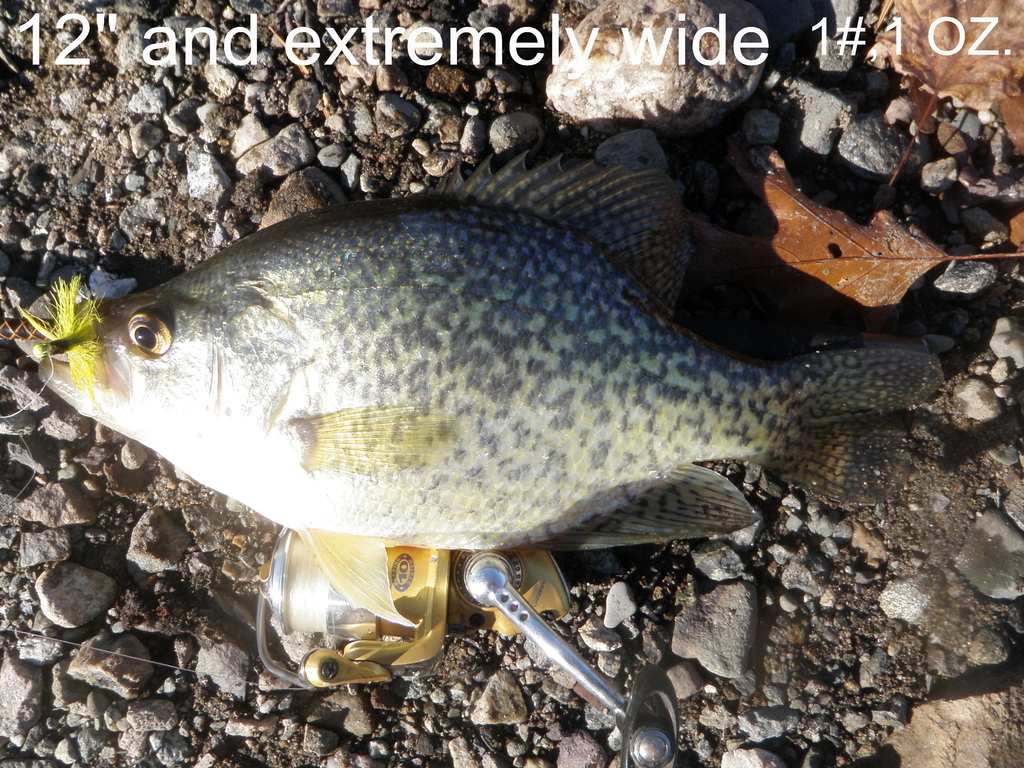 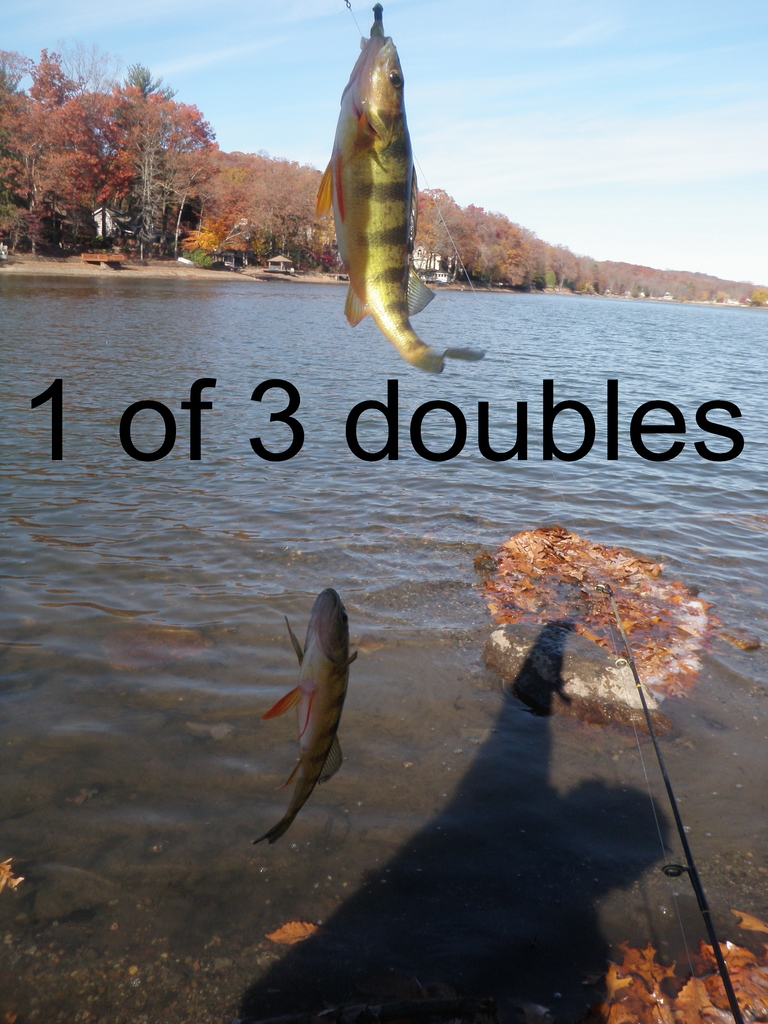 You need to be a member of Bluegill - Big Bluegill to add comments!

Glad to pass this on to you Carl .

Jim, thought about using tandems with the float but have never tried that .If I find a suspended fish application and I'm in a boat ,I'm sure it will work . Two species doubles are a treat.

John...I am intrigued...have you ever used the tandem jig rig with a 'fixed float application? Did it work, if so?

Many years ago I would tie a 1/32 oz shad dart about 16 inches above a #2 Mepps Black Fury and cast and retrieve it in the spring around brush and emerging weeds. Caught a lot of fish that way, too, with bass and gills often making up a 'double'

I am glad to see this informative post brought back by our buddy Tony...good stuff!

Sounds like a good usage Ken, for Crappie . I mostly get Yellow Perch on this rig .I'll bet it would work in some of those bridge spots for Smallies too .Imagine a tandem Smallie catch !Wow! I just have to be careful where I use them and not lose them a lot . If I could find a good Smallie spot I'd tie up two 16th oz. jigs in tandem and try that .

i can picture using something like this on a deep weed line edge for crappie out in a boat.

The waters down but I was getting fish at about  5-6' feet its a drop off and often they'd hit close to the end of the retrieve   I didn't lose any rigs at this spot .. Fished a shallower area yesterday and lost a bunch ,so be careful.

this is awesome john... im going to have to try this!!

how deep is the area that you are fishing here?

"R U tipping the Freak jig? You simply have an amazing fishery there Jeffrey! "
14 hours ago

"Fran Manuel wrote about it here."
16 hours ago

"That is a Joe Robinson idea, too as published in his book Piscatorial Absurdities. I've tried…"
16 hours ago

carl hendrix commented on Jeffrey D. Abney's status
"Great answer Jeffery;;  as you said; it's a personal thing;; it's also my oppinion…"
Saturday

"I try to avoid cleaning the hybrids, really cool to see"
Friday

"Joe was flattered, easily his best fishing trip of 2021."
Friday

"Yeah, all you see here is a couple legs hanging out of his mouth."
Friday

"He had to have it for sure!"
Friday